As my example of outward compassion I will again be posting a copy of a document I wrote a while ago. I apologize for the recycled information, but this story has technically never appeared on my blog, only on the forum. I think it quite perfectly illustrates how easy it is to be compassionate to others. All it takes is some time and an open heart.

I hope you enjoy! 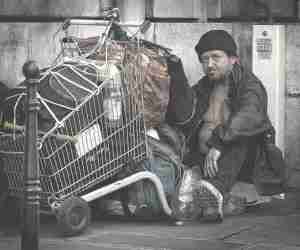 A Sandwich and an Ear

The city I live in, Ottawa, is like many other larger cities. It has a population of homeless people that struggle to survive from day to day. I see many such people on the streets of downtown Ottawa, asking for change. I often think to myself, “Give me time and I will bring you change.”

A few weeks ago, as I was in line at a local sandwich shop it occurred to me that perhaps I should buy two sandwiches instead of one. I had some time and felt like making a little change. I walked around for a bit looking for someone who seemed like they might be hungry. On this particular day it was rather cold, and there were few people around. It is funny how when we are looking for something, it is always harder to find it. I was just getting ready to give up when I rounded a corner a second time and found a man in his early fifties with his hat outstretched and a rather nasty scab on his nose. I offered him a sandwich and asked him if I could sit down.

He seemed rather surprised at this gesture. I had two sandwiches, one ham and one roast beef. I asked him which one he would prefer and he literally stuttered over the answer. What I gathered was that he would be happy with either one, but I insisted he choose. He settled on the roast beef and unwrapped it, to take a big bite.

We ate together, quietly at first. After a couple of bites he put his sandwich aside and he began to talk. I said very little, mostly listened. I know that when I am down, I usually only really want someone to listen to me. So listen I did.

It turns out his best friend is a bottle. He introduced me to him very quickly and explained how his life now had a lot to do with his daily 8:00 am stroll across the bridge to Gatineau where he has credit at a small depaneur. He would buy himself a couple of tall cans of beer, usually on credit, but then would always pay his debts every Wednesday, when he received his allowance from his mother. It seems his mother was alive and guarding some small fortune that had been left to him. Because he can’t be trusted (his words), his mother gives him $100 a week as an allowance.

The proof he couldn’t be trusted was the inch long scab that was healing on his nose. The result of a drunken brawl from just a couple of days ago. It seems that at the shelter he stays at he has a few enemies. Men that harass him for his allowance and even beat him up. As I tried to think of anything to say, I realized that nothing was expected and instead listened with Love in my heart.

After I finished my sandwich I excused myself and wished him a good day. I told him he was a good friend and that I looked forward to seeing him again. He thanked me for the sandwich and I walked home.

Outward compassion is about identifying what someone is really asking for and giving it to them. When a homeless person asks you for change, don’t search in your pocket for coins. Offer them TRUE change.